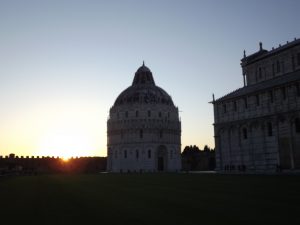 This site-specific composition was designed for an interplay of voices within the acoustics of the Pisa Baptistery (Battistero di San Giovanni). The reverberation time of the Baptistery can reach up to 15 seconds, offering a vast space of time to handle sustained notes. Its reverb sound is created through different resonant frequencies, also offering a unique texture. The composition, therefore, explores chords created only by two voices, leaves gaps of silence so the listeners can focus on the reverb sound, interacts with the room’s main resonant frequency and develops a sense of a quasi-static texture. The chosen tuning was A on 432Hz, due to this frequency being close to the room’s main resonant frequency and for its relationship with the rotation of the Earth around the sun, which is 136.10Hz (C#).

The title, Voices of Earth and Sky, refers to the singer’s voices and the Baptistery’s resonance coming from the dome. It’s a dialogue between sounds of the ground and of higher structures, as well as earth and sky.

More about this project 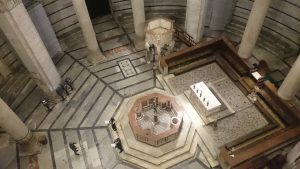 The aural architecture of the Pisa Baptistery makes it an interesting space for exploring sound and for composing sonic experiences that can only exist at this site. The Baptistery is well known for its long reverberation time, which can reach up to fourteen seconds. This inspired me to engage my current research at the University of Liverpool with an overseas project in Pisa. A key aspect of my research consists of the creation of ‘musical paintings’, a new type of mixed media comprised of multichannel acoustic panels designed for gallery exhibition. Integrating the Baptistery’s soundscape into this type of media would certainly enrich this collection.

The Baptistery is a major tourist destination; it is the largest Baptistery in Italy and a world heritage site protected by UNESCO. Due to the high number of tourists visiting the site daily, it was necessary to take into consideration the lack of private access for executing the project. The local institution that protects and promotes the Baptistery, along with other monuments at the Piazza del Duomo, is the Opera della Primaziale Pisana (OPA Pisa). The institution agreed to offer one hour out of visiting hours to record the proposed composition. To further simplify this project, local musicians were chosen to participate, a tenor, Ettore Martinelli, and a soprano, Silvia Pepe, both students of the renowned soprano Patrizia Morandini. The composition produced for the site was performed and recorded on the 20th of April 2017. 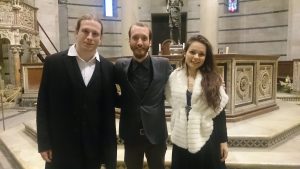 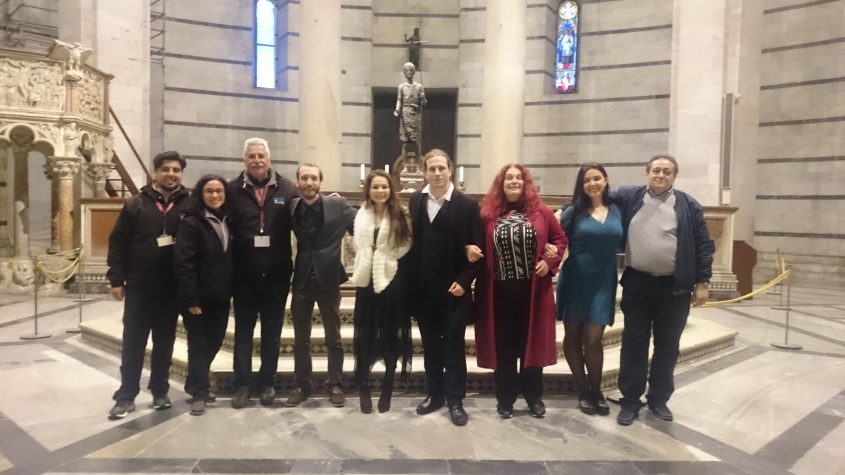 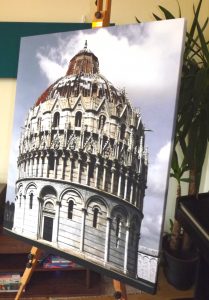 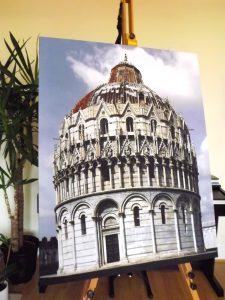 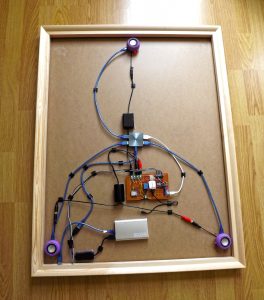 The images above show the final result of this project, a musical painting comprised of a multichannel system of 3 loudspeakers. This media performs the composition and represents the Baptistery’s soundscape through an acoustic reduction. The recording from the ground level is reproduced by the lower loudspeakers and the recording from the upper level is reproduced by the upper loudspeaker. When the musicians sang (at the ground level) the sound travelled up arriving at the top with some delay. This effect can be clearly perceived when listeners observe the painting. Here is a schematic representation of the effect: 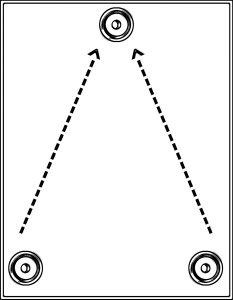 Thus, this painting represents the Baptistery’s soundscape through a miniaturization of the actual acoustic space. Other similar experiments are being currently studied as part of my research at the University of Liverpool. Furthermore, a long-term project for more similar projects (Sonus in Situ) is under-development to experiment similar ideas within other sites of peculiar acoustics.