Dr Ian Costabile is a UK-based artist, interface designer and researcher who has earned a PhD in Music Composition from the University of Liverpool. His works often explore interactivity, lighting and sound spatialisation. Ian has written experimental music for orchestra and chamber music, collaborating with renowned musicians from around the globe. His most recent musical experiments have focused on spatial sound, the use of light devices and themes relating to stars and constellations. His music has also been used as the soundtrack for documentaries, such as the award-winning Ultraviolence (dir. Ken Fero). 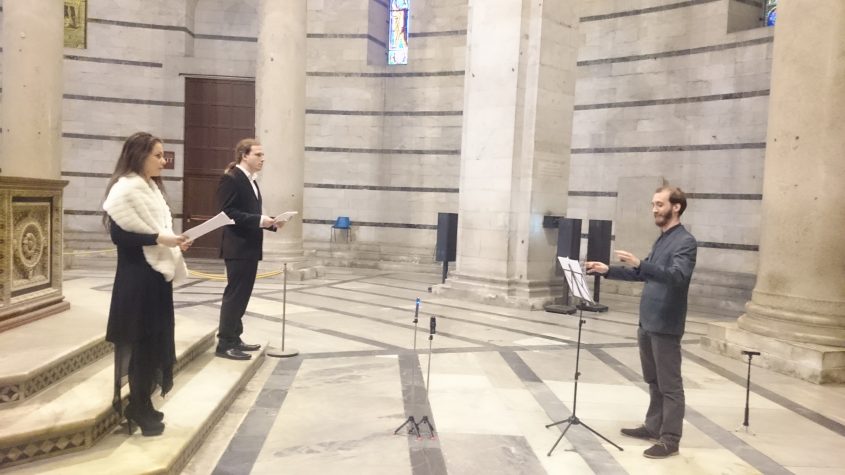 AS A SOUND ARTIST… 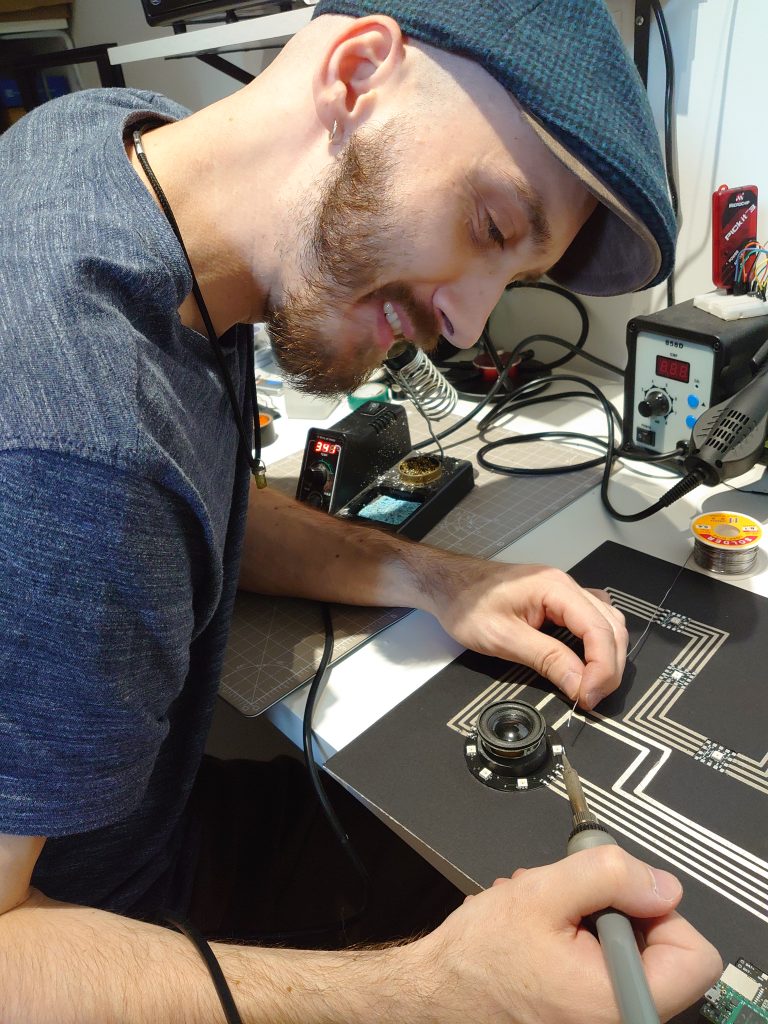 I thought it would be nice to include here a longer bio with a more personal touch. I’m 37 years old (as of 2022) and I was born in a busy city full of skyscrapers called São Paulo (Brazil). People usually ask: “How come your name is Ian and you were born in Brazil?” Well, there are so many ‘Ians’ in Brazil nowadays! São Paulo is a city with a lot of international music influence, replete with concert music, great jazz bars and museums. It’s a city of all sorts of luthiers where you can easily find someone who can fix your viola or make a baroque recorder from scratch. It’s a big city.

As today my artistic career involves domains beyond clefs (e.g., soldering, programming), I will try to trace here my past through all different aspects. As a kid in the 1980s, I enjoyed playing games and exploring my dad’s 486 computer. At that time there was no internet as we know it today. There was something called BBS (bulletin board system) where I used to communicate with people around the world by typing over the black screen background of MS-DOS. In those times I explored adventure games (LucasArts’ were my favourites) and the early-internet culture, films and music from the 80s or those super-productions that emphasised sound and light also helped to shape my cultural development and future ideas. As a kid, I wanted to be an inventor and design spaceships. If I only knew how complicated the world of patents could be!

Almost every Brazilian has an acoustic guitar in the house–the old samba spirit of Brazil. When I was fourteen, I borrowed my dad’s guitar and began learning it, highly influenced by both rock and classical music. After school, I worked at a web design company, so I split my learning between music, HTML, CSS and Photoshop. Those were the times when people used ICQ and mIRC instead of What’s App.

In those teen days, I was lucky to be admitted to the public conservatoire (ULM/Centro Tom Jobim), where I started with the basics of theory and aural, and later studied classical guitar privately. I began performing and recording popular music and I also studied at the guitar institute of São Paulo (IG&T).

Those initial skills allowed me to work (teaching and making websites) and support my studies at an academic institution (FAAM/FMU), where I took modules such as orchestration, counterpoint, aesthetics, piano, percussion, and developed aural skills. During that time I also played in several bands, such as Selene, a trio of live trance music (electric guitar, bass and keys working with dodecaphonic material and all sorts of experimentation). I finalised my BA in composition with a portfolio of chamber music, at a time when I was highly influenced by the paintings of Matisse and wanted to make neo-impressionistic music (thus I developed my own ‘musical pointillism’ technique). After my BA graduation, I continued my compositional studies through a course with Almeida Prado, a prestigious Brazilian composer who published an incredible book full of compositional techniques. In 2009, I migrated to the UK to look for work and develop further my career.

When I arrived in the UK I was 24 and I focused on teaching Portuguese as a foreign language, which eventually became a full-time job. I taught privately, GCSEs, A-Levels and published my own methods for learning the language. I also played music weekly in restaurants and pubs (Lilium Guitar Duo and Uaná Duo) and worked on a solo album for the electric guitar (Masks, Devas and Aliens).

I studied for an MA degree in Art Aesthetics & Cultural Institutions, which I achieved in 2013. My goal was to understand aesthetics to a deeper level and to incorporate this learning into my compositions. In my dissertation, I investigated ‘originality’ and ‘innovation’ in 20th Century Art. I became very much inspired by Susanne Langer’s writings and my understanding of the world of abstractions, patterns and symbolism became much clear. From there, I realised that I had to open up from the traditions of instrumental composition and explore what is sometimes known as ‘sound art’ to be able to manipulate sound abstractions further.

In 2016 I began a PhD journey at the University of Liverpool, which allowed me to rapidly develop several skills and acquire a deeper knowledge of electronics and interface design, which supported the development of my sound canvas and sculptures. This doctoral training was supported by the TNW programme (AHRC funded) which provided me with tools for working with the industry and inspired me to found a startup company called Sonalux, where I sell some of my design and prototype ideas (like the MagicPick, an electronic guitar plectrum with a metronome).

My most proud achievements are the soundscape recordings I did when doing fieldwork in Indonesia (presented through my sound canvas collection), my work at the Pisa Baptistery and most recently, the Intersidereal suite for harp and lights, which expressed 21st-century music through a virtual light concert and performed by the fabulous Bethan Griffiths. Through all the art I produced, I’ve been a perseverant explorer in search of innovative aesthetics and meaning that can be disseminated and shared with our society.

Other creative work I have expressed through writing. I have a few self-publications, including a novel (The Wizard’s Lilies) and a book about meditations on time (Meditations on Past, Present and Future). In my spare time, I’m a yoga practitioner, vegetarian, guitarist, and nature-lover, and I enjoy my large collection of recordings of Debussy’s music, organised by Lesure number.

In January 2022, I received the title of doctor in philosophy. Now I am looking for work opportunities, creating sound-light art, running Sonalux, reading about constellations and having fun with my guitar, piano, bamboo flutes and oscilloscopes!