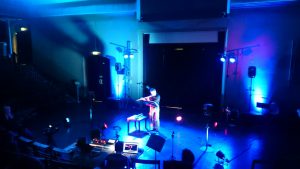 This piece explores the interaction between ‘pitch space’ and the ‘auditory space’. When the alto flute plays certain notes, an electronic sound moves between six loudspeakers positioned behind the audience. The result is that the flute is able to assume the role of a spatial conductor. In some sections, this interaction is ‘linear’, where the changes in pitch are equivalent to the spatial shift between the loudspeakers. In other sections, the interaction is non-linear, generating interactive gestures or bi-dimensional shapes.

A musical painting was prepared with 6 channels audio system to represent this composition in galleries.

This piece was first performed at the Victoria Gallery & Museum in Liverpool at the Open Circuit Festival, in March 2017.