In July 2014 the music exhibition Static Music was presented to the public at The Gallery Liverpool, exhibiting four artworks by Ian Costabile.

The intention was to present an unconventional way of experiencing music. Static sonorities were representing the present moment and allowing the public to explore sound changes through their own movements. More about this concept can be seen here.

In different sections of the gallery, different sonorities could be heard. In one corner there was the sonority of Bamboo Heaven, 8 bamboo flutes playing continuously at the same time producing a chord. On the other side, the public could walk under a ceiling made of 90 pairs of earphones and listen to different sonorities depending on their position. Next, there was a musical painting on the wall projecting sounds of a forest and finally, the public could sit down and listen on headphones to the 4 static movements of the Binaural String Quartet.

A review written by Leanne Cunningham (Art in Liverpool) can be seen on:
http://www.artinliverpool.com/?p=52879 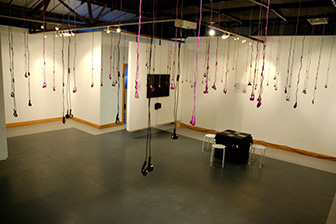